Ⅰ What is UFS?

UFS (Universal flash storage) has two meanings, one refers to the mobile phone storage interface protocol, similar to SATA, PCIe/NVMe. The other is storage devices that use this protocol.

The specification is supported by several market leaders in consumer electronics, including Nokia, Sony Mobile Communications, Texas Instruments, STMicroelectronics, Samsung, Micron, SK Hynix, etc. UFS card is the replacement of embedded MultiMediaCard (eMMC) and SD card. UFS uses the M-PHY physical layer developed by the MIPI Alliance. It has a speed of 2.9Gbps per thread to 5.8Gbps per thread. UFS implements a full-duplex LVDS serial port, which has a wider bandwidth than eMMC with 8 parallel threads.

The biggest difference between UFS and eMMC is that the parallel signal is changed to a more advanced serial signal, which can quickly increase the frequency. At the same time, half-duplex is changed to full-duplex. UFS is based on the small computer system interface SCSI Architectural model and supports SCSI Tagged Command Queuing. The Linux kernel already supports the UFS format.

We know that our computer consists of three major parts: CPU, memory, and hard drive. Calculation and control are carried out by the CPU. The memory temporarily stores the data needed when the program is running. And the hard drive can store data for a long time.

The history of the UFS protocol

Every day, we use a mobile phone, which is effectively a little computer with three key components: a CPU, memory, and storage devices. The storage device is equivalent to a computer's hard drive, which is used to store data on the phone for a long time, such as videos, photos, music, and system data.

As a result, people's expectations for mobile phones are increasing: the speed should be quick, the capacity should be vast, the operation should be smooth and not stuck...

In recent years, flash memory technology has advanced to the point that it is now faster than ever, whether it is a hard disk on a computer or a storage device in a mobile phone.

On computers, from HDD to SSD, from SATA SSD to PCIe SSD, hard drives are getting faster and faster.

Memory cards in mobile phones are getting faster and faster, from SD cards to eMMC cards to UFS cards.

Ⅲ Why is UFS so fast?

The predecessor of UFS is eMMC, which uses parallel data transmission. The biggest problem with parallelism is that the speed cannot be increased. It is because once the clock goes up, the interference becomes larger and the signal integrity cannot be guaranteed.

To make UFS fast, these infrastructures are necessary. But to make full use of the low-level high-speed data transmission channel, the cooperation of the upper-level data transmission protocol is also required. It's like we now have a spacious and flat highway, and we need a high-speed car to drive on it.

How can the upper layer of the UFS protocol give full play to the advantages of the high speed of the lower layer? 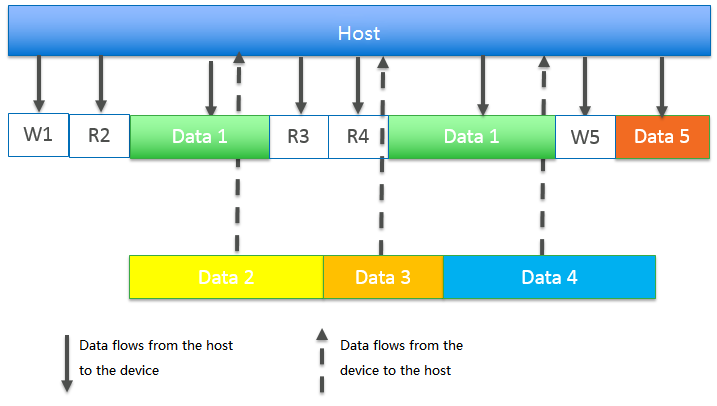 As it supports the command queue, the host can send several commands to the device at once. As shown in the figure above, the host sends a write command W1 and a read command R2 to the device at once. The device can process these two commands in parallel. Because the protocol enables full-duplex operation, the device can also return the data of the read command R2 to the host as the host transmits the data of the write command W1. The following commands R3, R4, W5... are handled in a similar way.

Today's mobile phones have very rich applications and require multi-threaded operations. The efficiency of UFS processing commands is substantially improved due to the presence of full-duplex and command queues, providing users with a fantastic experience.

We have made a few comparisons between UFS and eMMC, but I seem to have forgotten to explain what eMMC is.

In 2015, eMMC5.1 was released. It has a maximum speed of 400MB/s, is the most recent eMMC standard. JEDEC already released UFS, not sure if it will release a new eMMC standard. After all, physical signals limit parallel transmission of eMMC, thus expecting a qualitative improvement in speed is unrealistic.

If the mobile phone's HDD is eMMC, then the mobile phone's SSD is UFS. There is little doubt that UFS has supplanted eMMC as the primary storage protocol for mobile phones. However, there is another obstacle on the road to UFS's dominance, and that is NVMe. Some people say that NVMe is not a protocol standard for SSD? Yes, but I want to remind everyone that the storage protocol in Apple's mobile phones now is NVMe instead of UFS. UFS and NVMe will be available on Android and Apple phones in the near future. We'll have to wait and see whether UFS and NVMe are dichotomous or integrated in the long term

Introduction to Wireless Charger
What is a Cell Phone Antenna?