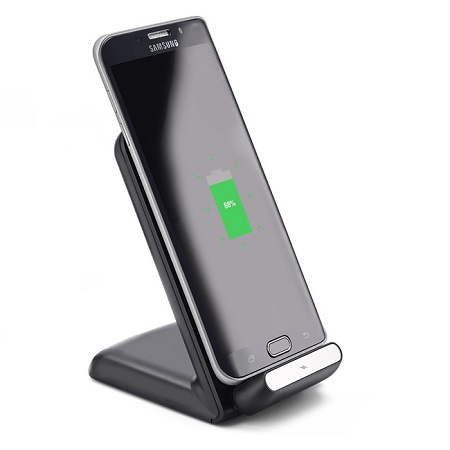 People are rapidly using new electronic items such as mobile phones, and tablet computers, in their daily lives. Traditional wired chargers are also used in the matching chargers. However, wired chargers' compatibility and versatility are limited, making them cumbersome for users. At the same time, post-disposal treatment contributes to contamination in the environment. As a result, providing users with more dependable, convenient, and timely charging equipment is critical. The advancement of wireless technology has enabled the transmission of radio power.

Visual charging, smart charging, and wireless charging will be the three main types of battery charging in the future. In 2016, there were only 138 members of the International Wireless Power Consortium (WPC), but now there are more than 200 WPC technology companies, such as Apple, Samsung, HTC, Huawei, Lenovo, Xiaomi, Nokia, Sony, and many other mainstream mobile phone manufacturers. A Qi wireless charger features a flat surface-a charging pad that can charge mobile devices. Qi specifies three different methods for coil calibration, namely: guided positioning (magnetic attraction) (as shown in Figure 1(a)), free positioning (moving coil) (as shown in Figure 1(b)), and free positioning (Coil array) (as shown in Figure 1(c)).  Let's briefly explain the three methods below. 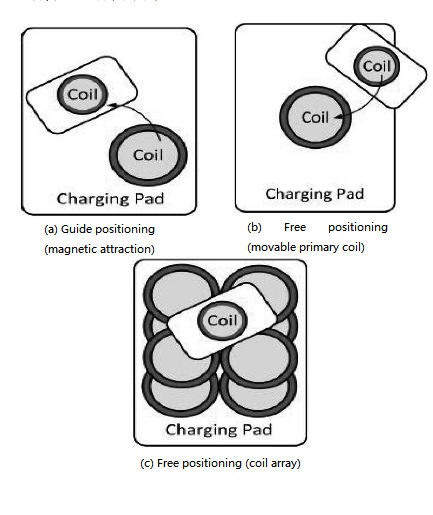 Model of the wireless charging system

It lets you charge several gadgets without having to worry about their position. Compared with the above two methods, this calibration method is based on a more expensive and more complex winding structure and control electronic elements. But it provides us with more user-friendliness.

Electromagnetic induction is currently the most commonly used wireless power transmission method. Its technology has been mass-produced, and its manufacturing costs are lower than those of competing technologies. Currently, there are three major alliances dedicated to the development and standard formulation of wireless charging technology. The Alliance for Wireless Power (A4WP), Power Matters Alliance (PAM), and Wireless Power Consortium are the three alliances (WPC).

The Qi standard is the "wireless charging" standard launched by WPC, which uses the most mainstream electromagnetic induction charging technology. The Qi standard mainly targets portable electronic products such as cameras, video, and music players, toys, and mobile phones. At present, the research and design of low-power wireless chargers are mainly for mobile phone wireless charging, using TI's BQ500211 dedicated chip. Some low-power terminals also use dedicated integrated chips, which are developed in the initial stage using dedicated integrated chips. It can save development time, but it is not conducive to cost reduction and later expansion and upgrade in the long run.

Despite the fact that wireless charging technology has progressed to some level, there are still some significant technical issues to overcome in the development process. First, the charging efficiency is not high. Once the distance is a little farther, the efficiency of charging will decrease sharply. Second, safety issues during the charging process. High-power wireless charging equipment will generate a large amount of electromagnetic radiation, which will cause certain adverse effects on health, and will also have interference effects on aircraft and communications. The third aspect is practicality. The existing wireless charging technique can only be implemented by affixing it to a certain fixed spot. Fourth, the price is expensive. Since wireless charging technology is still in the preliminary stage of research and application, the cost of research is relatively high, so the price of the products developed by it is relatively high.

Radio waves are a relatively mature wireless charging method for wireless chargers at this stage. Its working idea is to capture radio waves in space using small and efficient receiving circuits, then convert electromagnetic energy into steady electrical energy. There are currently firms claiming to be able to charge electrical gadgets smaller than a cellular phone wirelessly from a distance of a few meters.

This is a new wireless charging technique that is currently in its early stages of development. This technology is mainly researched by a team led by a professor of physics at the Massachusetts Institute of Technology. Intel’s engineers use this technology as a basis to achieve a distance of about 1% from the power supply. A 60-watt bulb is lit up about a meter away, and it has a transmission efficiency of 75%. Intel engineers stated that the next goal will be to use this wireless charging technology to charge modified laptops. However, in order to reach this goal, the interference and influence of electromagnetic fields on other computer components must be resolved.