A surge protection device (SPD) is an indispensable device in the lightning protection of electronic equipment. The function of a surge protection device is to limit the instantaneous overvoltage that penetrates into the power line and signal transmission line within the voltage range that the equipment or system can withstand, protecting the protected equipment or system from impact and damage.SPD is suitable for AC 50/60HZ, rated voltage 220V/380V power supply system. 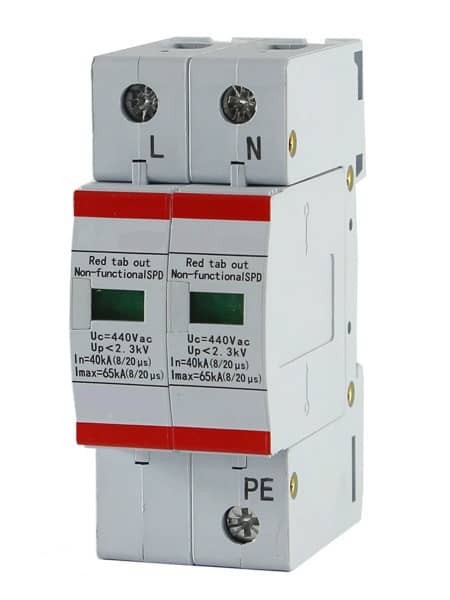 The lightning discharge between the cloud layer and the ground consists of one or several separate lightning strikes, each of which carries a number of currents with high amplitude and short duration. A typical lightning discharge will consist of two or three lightning strikes, each with a time interval of approximately one-twentieth of a second. Most lightning currents fall in the range of 10,000 to 100,000 amperes, and their duration is generally less than 100 microseconds.

1. The protection flow is large, the residual pressure is extremely low, and the response time is fast;

4. With power status indication, indicating the working status of the surge protection device;

1. Nominal voltage Un: The rated voltage of the protected system matches. This parameter indicates the type of protector that should be selected. It marks the effective value of AC or DC voltage.

2. Rated voltage Uc: The maximum effective value of voltage that can be applied to the designated end of the protector for a long time without causing changes in the protector characteristics and activation of the protection element.

3. Rated discharge current Isn: The maximum impulse current peak value that the protector can withstand when a standard lightning wave with a waveform of 8/20μs is applied to the protector for 10 times.

4. Maximum discharge current Imax: When a standard lightning wave with a waveform of 8/20μs is applied to the protector for one impact, the maximum impulse current peak value that the protector can withstand.

5. Voltage protection level Up: the maximum value of the protector in the following tests: 1KV/μs slope of flashover voltage; residual voltage of rated discharge current.

6. Response time tA: It mainly reflects the action sensitivity and breakdown time of the special protection element in the protector. The change in a certain period of time depends on the slope of du/dt or di/dt.

8. Insertion loss Ae: The ratio of the voltage before and after the protector is inserted at a given frequency.

10. Maximum longitudinal discharge current: It refers to the peak value of the maximum impulse current that the protector can withstand when a standard lightning wave with a waveform of 8/20μs is applied to the ground for one time.

11. Maximum lateral discharge current: It refers to the peak value of the maximum impulse current that the protector can withstand when a standard lightning wave with a waveform of 8/20μs is applied between the line and the line.

12. Online impedance: It refers to the sum of the impedance and inductance of the circuit flowing through the protector under the nominal voltage Un. Usually called "system impedance".

14. Leakage current: It refers to the direct current flowing through the protector under the nominal voltage Un of 75 or 80.

The circuit of the surge protection device has different forms according to different needs. The basic components are the ones described above. A skilled lightning protection product researcher can design a variety of circuits. According to the difference of the circuit system, there are three main SPD circuits: single-phase, TN-C, and TN-S. 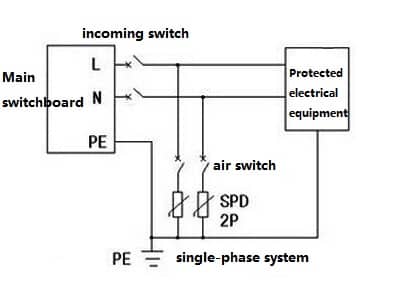 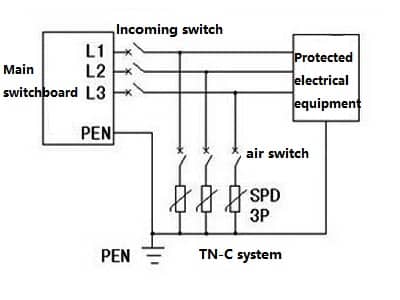 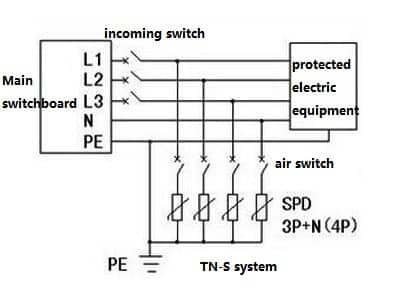 It is generally composed of two metal rods exposed to the air separated by a certain gap. One of the metal rods is connected to the power phase line L1 or the neutral line (N) of the required protection equipment. The other metal rod is connected to the grounding line ( PE) phase connection. When the instantaneous overvoltage strikes, the gap is broken down, and a part of the overvoltage charge is introduced into the ground, avoiding the voltage increase on the protected equipment. The distance between the two metal rods in the spark gap can be adjusted as required, and the structure is relatively simple, but the disadvantage is that the arc extinguishing performance is poor. The improved spark gap is an angular gap. Its arc extinguishing function is better than the former. It relies on the electric power F of the circuit and the rising effect of the hot air flow to extinguish the arc. 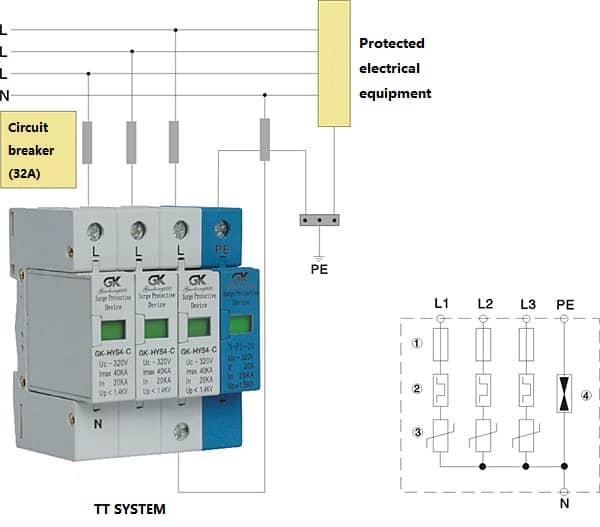 The gas discharge tube can be used under DC and AC. The selected DC discharge voltage Udc is as follows:

Under DC: Udc≥1.8U0 (U0 is the DC voltage for normal operation of the line)

Under AC: U dc≥1.44Un (Un is the effective value of the AC voltage for normal operation of the line)

It is a metal oxide semiconductor with non-linear resistance with ZnO as the main component. When the voltage applied to both ends reaches a certain value, the resistance is very sensitive to voltage. Its working principle is equivalent to the series-parallel connection of multiple semiconductor P-Ns. Varistors are characterized by good non-linear characteristics (I=non-linear coefficient α in CUα), large current capacity (～2KA/cm2), low normal leakage current (10-7～10-6A), and low residual voltage, the response time to instantaneous overvoltage are fast (~10-8s), and there is no freewheeling.

A TVS diode has the function of clamping and limiting voltage. It works in the reverse breakdown zone. Because of its low clamping voltage and fast action response, it is particularly suitable for use as the last few levels of protection components in multi-level protection circuits. The volt-ampere characteristics of the suppression diode in the breakdown zone can be expressed by the following formula: I=CUα, where α is the nonlinear coefficient, for the Zener diode α=7～9, in the avalanche diode α=5～7

The choke coil is a common mode interference suppression device with ferrite as the core. It consists of two coils of the same size and the same number of turns symmetrically wound on the same ferrite toroidal core, which forms a four-terminal device. It has to suppress the large inductance of the common-mode signal, while the small leakage inductance for the differential mode signal has almost no effect. The use of choke coils in balanced lines can effectively suppress common-mode interference signals (such as lightning interference) without affecting the normal transmission of differential mode signals on the line.

What are Motherboards?
Hydrogen Fuel Cell: Features, Working and Applications